Wahn here again with the game updates in the past week:

NPC/Pets:
Demon Brute ("Brutus"): There is now an option to cleanse your captured demon of his inner evil and anger, making him a much nicer companion to have along. The priestesses of the Church of the Maternal Beast in the beach area will happily help you with this task, you can just ask them about it on your next visit to the confession booth. Brought to you by myself (Wahn).
Lilith: There is now a chance to walk in on the lusty succubus enjoying herself with a feral gryphon partner. Written by UrsaOmega. (to get a 20% chance for the scene as you enter, don't have sex with Lilith for a full day at least)

Creatures:
Hydra: This many-headed beast had been sighted in the junkyard area next to the abandoned warehouse. Brought to you by Stripes.
Jaguar Warrior: A museum exhibit about the ancient Aztecs came to life. This new anthro feline now roams the museum, prowling for intruders he can have his way with. Written by GentlemanB.
Pink Poodle: These high-class french poodle ladies can now be found in the high rise district. Also brought to you GentlemanB.

Posted by Wahn at 9:32 AM
Email ThisBlogThis!Share to TwitterShare to FacebookShare to Pinterest

Hi everyone, this is Wahn with a new art update. The talented Lay over in Y!Gallery just finished a commission for me, which I want to share with everyone.

So let's have it then - I present Elijah, being the usual handsome good guy on the left, while his evil twin has some... different plans on the right: 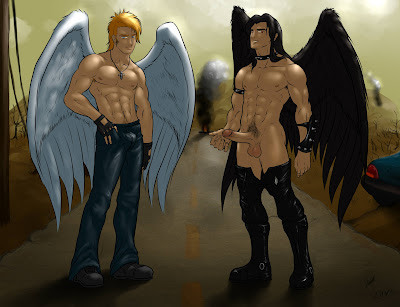 In case you haven't made his acquaintance in the game yet and want to know how to meet him, hunt for the "Angel vs Demons" event in the Red Light District, then go rescue him from the Burned-Out Chapel.

Posted by Wahn at 1:53 PM
Email ThisBlogThis!Share to TwitterShare to FacebookShare to Pinterest

Hello everybody, I’m IMR1fley.  I do 3D modeling and animations.  I've recently started talking with Nuku about making avatars and custom animations for Flexible Survival.  I’m really excited, and can’t wait to show you all some of the things we have planned.

However, I've hit a snag.  Due to complications with bone rigging, It’s almost impossible for me to make movable anthropomorphic characters.  Basically, anything with wings, a tail, or non human feet can’t be made just yet.  (This doesn't mean never, just while I get the program to work.)

But I still want to be able to make these for you guys and the game.  I can still make Humanoid characters with a wide array of variations.  (Genitalia [that can be whatever you want], fur, minor facial features, items, etc. etc.)

Now, since this will be my first time actually making something for you guys, (and gals,) I thought it would be a good idea to go through a “community trial” of sorts.  I’d be willing to take 3 different commissions at less than half price.  1 male, 1 female, and 1 herm.  Those three commissions will be how you all judge my worthiness.  You will basically be going into this blind.

The current trial price for one commission is $20.  Your commission comes with your choice of Skin/fur color, genitalia type, any three items you want, and a few other specifics.  If you have any questions, send them to Nuku, and he will forward them to me.

However, I do have something I can show you, that way you aren't jumping into this with nothing to judge me on at all.  Here are the base body types I use for most of my models. 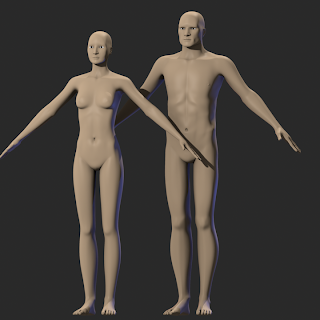 Posted by David Silver at 11:22 AM
Email ThisBlogThis!Share to TwitterShare to FacebookShare to Pinterest

Here's your regular content update to keep you advised of the new stuff added or improved in the game.  The queue for Writer for Hire's looking pretty clear, so now'd be a good opportunity for you to put in your donation requests.

Critter:
Teddy Bear: Player victory has been added and the endings have been expanded with normal and pure results.
Spidertaur: A set of player loss scenes that change and progress the more you submit, eventually becoming one of its favourite prey.  Also, updated endings.  Added up Wahn.
Latex Ermine: Player victory sex.

Posted by Stripes at 6:31 PM
Email ThisBlogThis!Share to TwitterShare to FacebookShare to Pinterest

We've got more new content added to the game for you all to enjoy.

Latex Ermine: Thanks to a generous donations from a semi-regular contributor, we have this new female critter for the game.  Currently, I've only done the monster victory sex for her, as I wanted her released alongside this lovely artwork I asked to have done during Halcy0n's art stream this afternoon while I was writing her up.  It made for great inspiration.  Expect her player victory sex to show up soon.  EDIT: Updated image. 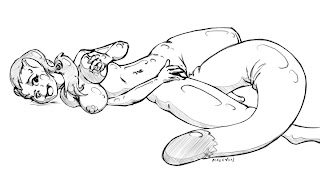 Artemis: The second modification option for your rubber tigress companion is up and running for you to enjoy.  While there's still a lot to do with this, things are going ahead steadily.
Dom-Icarus: More scenes have been added for the dominant version of your passarine playmate.  Just have sex with him a few times and they should appear periodically.

Posted by Stripes at 6:19 PM
Email ThisBlogThis!Share to TwitterShare to FacebookShare to Pinterest

Here we have more art for the game received by Wahn.  For your viewing pleasure this time is the dark and sinister Spidertaur and his newest catch.  To be caught by him yourself, go check out the Warehouse District.  Artwork by CrashBurnDraw on Y!Gallery. 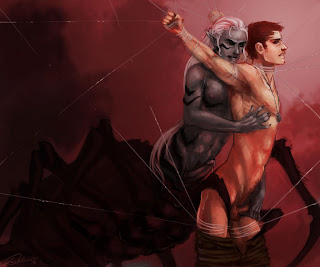 Posted by Stripes at 3:00 AM
Email ThisBlogThis!Share to TwitterShare to FacebookShare to Pinterest

Voting for the bonus hours for the past month has been closed, with NPC scenes winning by a narrow margin.  The 5 bonus hours I'll be doing will go towards making new content for existing NPCs in need of sprucing up.

As well, here's a quick listing of the new content added to the game since the last announcement:
sub-Icarus: You'll now get a sex menu to pick your options post-attic.  More attic scenes have also been added, but due to poor planning on my part, they're very difficult to obtain at present.  They require huge balls (36+) and an avian pred infection, meaning you'll pretty much need One Way to get them for the moment.  The Feral Gryphon's also been added to the list of avian predators.
dom-Icarus: Another set of scenes have been added to the potential sexy times you can have with the now dominant passarine.
Teddy Bear: More Teddy Bear vore has been added, enhancing the existing scene and adding a second variation to it.  Teddy Bear endings are now available, including a special one if your humanity is too low after being vored by her.
Demon Brute pet: You can new get a special, one time scene if you've got the enslaved demon as your companion after winning a Succubus fight.  The defeated temptress, Lilith, will be impressed and offer you a means to change your infernal slave's gender.  Update by Wahn.
Sarah: The husky girl's bad ending has been somewhat modified due to the conflicts it would make with many other endings.
Female Husky: Her heat's been updated to provide lovers appropriate to your current area.
Saving: Alexandra, Artemis,the Demon Brute pet, Lilith, Felix, Sonya and Orwell have all been updated/added to the save word system.
Janice: Now accepts the Fennec as a valid proof of your vulpine interests.

Posted by Stripes at 5:59 PM
Email ThisBlogThis!Share to TwitterShare to FacebookShare to Pinterest

It's that time again - Bonus Time!

Because only about half of the donations this month went towards me with the Writer for Hire program, there are 5 hours up for voting on this poll.  Don't worry, the other 6 bonus hours will be handled by Nuku.

Due to the concerns raised during the last voting, I'll be running this month's poll on the forums.  As you'll need to sign in to vote, it should be much more accurate.  If you don't have an account, creating a login is very simple.  In the poll, you can select up to three options and you may change your vote before the end of the poll.

Up for voting this time are:
- NPC Scenes: New scenes with the various NPCs in the game. Mainly sex, but maybe other stuff too.
- Pet Scenes: New scenes with the various pets in the game. More interactions and new sex scenes.
- Special Attacks: New special attacks for critters, some simple ones and maybe one or two sexier, drawn out ones (like Messy Pig).
- New Heats: Adding some new heats to critters to make more use of that mechanic.
- Stables Quest Repair: More work on fixing/completing the Stables quest.
- Endings: Adding endings to several of the newer critters which didn't get them yet and improving older, short ones.
Posted by Stripes at 10:44 AM
Email ThisBlogThis!Share to TwitterShare to FacebookShare to Pinterest

Here's a list of the new stuff added to the game recently.  Some of these have further chunks to come, but have got enough content for you guys to enjoy while waiting for the rest to be added.

- Artemis: Now we're getting into the third phase of the rubber tigress pet's content.  After you've gotten close to the kitty, take her to visit Lisa at the Porn Shop to obtain some special items.  Only one's active for now, but there's plenty more planned.
- Angie and Midnight: The pantherherm pair have been set up to save and restore more fully going forwards.
- Alexandra: An alternate, good option has been added to the Doberman Cop, giving you the means to potentially befriend her instead of dominating her.  No sex (yet), but she will give you some hints.
- Dom-Icarus: A branching path will now allow Icarus, after joining you at the bunker, to become the dominant one if you've not gone through with the violent attic scenes.  To prompt this scene, try having sex with him as a female or as something other than an avian pred a few times.
- Sub-Icarus: More post-attic violent scenes have been added, increasing the variety of your dark abuse of your passarine prey.
- Sugar Glider: A fun event with a Sugar Glider and a cotton candy machine has been added by GentlemanB.
- Viking: The female Vikings unleashed by Wahn are storming the Beach.
- Wildcat: There's been an update to the sex scenes you'll get when beaten by the Wildcat, added by Blue Bishop.

Posted by Stripes at 3:03 PM
Email ThisBlogThis!Share to TwitterShare to FacebookShare to Pinterest

Wahn's obtained another piece of artwork based on his content for the game.  This time it's Private Orwell, one of the many studly soldiers at Camp Bravo.  It was done by CrashBurnDraw on Y!Gallery. 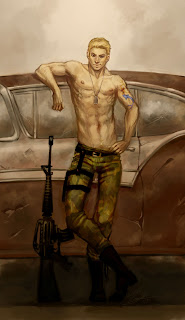