Get on over to the patreon and cast your votes for what gets done next. We have two at once.

First:
1. Otto Fuchs: Help Otto Fuchs, beginning with settling into his new home. He seems to attract attention so this is likely not as unevenful as it sounds.

2. Sex Ed: An introduction to the Behaviour and Customs course. Learn about canine, feline, and equine behaviour in the introductory lectures. Likely to be accompanied with practical demonstrations.

3. Cynthia: Learn more about the human sniper that accompanies wolves on their hunts. Events to introduce the wolf pack and their two leaders, the Den Master and Pack Alpha.

4. Sylvia: The border collie student has (yet) another thing she would like your help with. She is searching for a certain book which she believes will help her studies. Aid her and she shall surely share some benefits.

Second:
1.  A few events with Kalgur, an orc who wandered into the Campus. See him have an incidents with frat boys and watch him change.

2. Events to further get to know Triton, Poseidon's son, potential sex at the end.

3. A few events with a new student named Jake, a Panda, who the player runs into at the dorms.

4. Events with Cryrus, a Merman the player meets first at the beach but later can have more events in Atlantis.
Posted by David Silver at 6:58 AM
Email ThisBlogThis!Share to TwitterShare to FacebookShare to Pinterest

Hi everyone, this is Wahn again with the Flexible Survival News for May 2018.

Alexandra: The visual representation (back scars) of the Top Dog feat have returned.
Artemis & Liliana: The rubber tigress and equinoid warrior have both decided to move to the Library Courtyard. In addition, Liliana has received more sex scenes
Atlantis: The Celebrity Shark in Atlantis has been seen walking around the City Center. Perhaps you can run into him and eventually get to know him?
Blue: The goo people in the Mall have been polished up a bit too.
Body Shop: The body shop should now properly add and remove feats to make bought body parts permanent. If you have conflicting feats or other permanent infections, Moreau's permanency guarantee will fail, so there shouldn't be shifting back and forth from now on.
Campus Event Fix: The "wandering the campus" event now can be safely played through, without trapping you in an endless loop.
Clothing Size Change: A small bug in the code for clothing notifications during size changes has been fixed, making the messages appear less often.
Coura/Cole: Coura the mall rat's content has gone through another growth stage, further expanding the things you and Nermine can do with her.
Dash: The fox kit now will have a unique scene depending on if you have locked Fang in beta or alpha mode. This will eventually lead into a chain.
Dr. Moffatt: Various typo and consistency bugs in her scenes have been fixed.
Equinoid Camp: The Equinoid Camp has received an expansion! There are now three new NPCs (Amaryllis, Bryony, and Nakoma) to interact with.
Event Rewrites: The "Unorthodox Sight", "Family Fun" and "Auto Shop" events have been reworked to allow a nicer experience. More updates to come on that front too...
Feral Event: A new event with special interest for our human/feral fans has appeared in the High Rise District.
Feral Mutt: The feral mutt has been reworked a bit, removing various typos.
Francois: The Gingerbread and Cheesecake infections should be functional now.
Garth: You can now tell Garth that you're too busy to fuck when you meet, even if you already fucked him of your own volition before.
Gloryhole: A new area in the Mall Bathrooms has been added where you can engage in some sexy gloryhole action
Graphics Clearing: The images of monsters are now removed after the fight with that creature ends.
Hunting/Exploration: The tags for hunting/exploration of numerous rooms have been adjusted, allowing you to hunt from more places and removing the "empty" hunt buttons from where you can't.
Hyena Matriarch: A variant to her repeatable vore scene, as well as a variant for sex scenes during her bound state, have been added
Koballoon: Fixed a small typo in the creature's code. They now properly display the last paragraphs of their events.
Messy Pig: There's a chance that the pig will make you give her a rimjob if she beats you. There's also a chance for her to eat you, putting you in a vore bound state if 'More Vore' is on.
Miyuki: The ice sorceress wants to send you out on a quest to invite anyone preferring cold areas to her nice and frosty cave.
New Artwork: We've now got pictures for Krampus, the pewter consort, and a new anthro shadow beast character called Mason.
New Mall Event: Axel the donkeyboy can now be encountered again after you've met him and his buddies during their dick size contest.
New Mall Event: There's now a macho wolfman on the prowl. Watch him pick up a female lynx from right up close, if you're interested in such things...
Otto Fuchs: You can now meet Otto for a third time and help him move house.
Pet Fix: You no longer have to dismiss a pet to make them go to their location in the Library, instead they will head there right off the bat.
Pewter Consort: Fixed text sometimes not showing up correctly during orgy bound state.
Pretty Kitty: A small typo in the description of the collars for sale has been fixed, meaning that you can pick up the right ones now.
Rachel: The somewhat private mental mouse pet has now taken up residence inside of the Breakroom's Pantry.
Rexx and Karen: Karen has been made a NPC who will be staying in the Library Breakroom. Rexx has also had a actionlink added to make it so you can beg for treats easier.
Sarah: The event where you can rescue Sarah from the huskies has been expanded upon.
Sewer Gator: Vore scene can be triggered from her den now
Stable: The Stable and connected events/quests had been put through editing to improve its writing quality a bit. An unfinished scene for fucking the former Stablemaster had also been completed.
Various Small Fixes: Numerous further things reported on the bug report channel have been corrected.
Video Tape: You can now find a new video tape in the city, depicting what happened to an urban explorer calles Mason on the day of the outbreak.

Here an example of some new FS game art, a picture of Krampus, drawn by the talented Lytta. The new graphics windows allows us to show images like this with far higher resolution in the game. 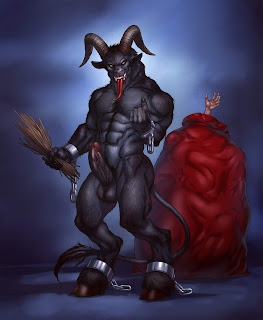