Hi everyone, it's Wahn here. My left hand is at least partially functional again by now (after being broken last month), so it's time to get a move on with some bonus hour content for you all to enjoy. There are twelve of them to be decided on, so I've decided to make it two blocks of six - meaning that there will be two projects of your choice getting extra content.

Be sure to check out these polls on the forum and vote on both of them (you got 3 votes each):
Male-Centered Poll
Female-Centered Poll
They're sorted by theme so that hopefully everyone can vote for something they'll enjoy.
Posted by Wahn at 5:15 AM
Email ThisBlogThis!Share to TwitterShare to FacebookShare to Pinterest

As I've mentioned, I'd attended Furnal Equinox a few weeks ago.  And by this point, veterans of the game know what that means - crazy sketchbook ARTZ!  That's right, I'm back with another wave of FS-related artwork which can be viewed on my FA page.  They (and the other backlog pieces) will also be added to the game.  I'll put them into the Wiki for future storage as well.  My thanks as always goes out to the artists, both for their fine work and their permission to include these pieces in the game.

EDIT: I should also include the updates to the game itself as well.  Just because we're making a shiny new engine does not mean that we're not making new content.  With Wahn still healing and Blue Bishop prepping for another big release, it's a bunch of new content from me.  There's also been a lot of typo corrections by Strongbird and some more background tweaks and improvements by XinacS.  Thankfully I've seen a pretty productive period and I've almost completely cleared my queue, though there's already people lining up to make requests and the first wave of Patreon items will be coming as well.  If you're looking to donate for content, now's the time to do it.

Posted by Stripes at 3:56 AM
Email ThisBlogThis!Share to TwitterShare to FacebookShare to Pinterest

Hello all this is Daniel the engineer responsible for making the new engine.  Quick note about myself.  I'm a college student studying comptuer sciece right now.  I've never programmed in html5/javascript before, but I'm crazy good at computer science.  If you think that I shouldn't be the one in charge of this project due to my inexperience in html5 or your particular expertise in html5 then email me and I'm sure I can change your mind.  I started working on this game last thursday, and since then I've been working with nuku and a couple writers on the engine.  So a lot of progress has been made since the last update so I thought I would let you all know whats going on so far.

Secondly for all you writers out there.  I'm able to parse all the inform inline statements and run them.  Which means on top of being able to do that, most of the execution logic for all the inform parsing/execution code is in the game i just haven't pieced it together yet.  Also I have the ability to run most of the inform code i just can't parse it in order to execute but baby steps.  As for what you need to do to get your old content into my game, most likely nothing.  I believe the only things that I can't just parse in will be commands that don't have any hyperlinks attached to them and definitions.  99% of the inform code I should be able to parse over but I'll let you know as I go.  My goal for this is to be able to import as much of the old inform code as possible without the writers having to rewrite anything they have already written.

Third for all you coders out there.  I've thrown this project on github here for you to look at and admire.  If anyone is good at html5 and could help with getting the window to auto reconfigure to the screen message me on github or email me or something.  The first time I've touched html5/javascript/css was last Thursday and honestly my time is better spent on the logic.  That's harder, more important, and what I'm better at.  Also If you see anything that I'm doing which is bad convention please let me know because again I'm very inexperienced with these languages.

Finally I have the actual game for you to try out yourself.  If you want to try it out download the game from here. Then just extract and double click on www/index.html and it should run.  Most likely there are some bugs so if you find any please in descending priority: log it on github, email me, or leave a comment here.  I'm sure the bugs are there so happy hunting.  Also If you have any suggestions on the engine so far please comment and I'll try to respond to you.

My next update will hopefully be a huge one.  I feel like I'm close to actually importing the old code, so the next time I post I will probably have all the locations/npcs in the game but what level of interaction I'm not sure yet.
Posted by Unknown at 8:53 PM
Email ThisBlogThis!Share to TwitterShare to FacebookShare to Pinterest

We have acquired a player of the game to start work on the new engine and they're making great strides towards an engine of our very own. Have some screenshots! For less than a day's effort, they're off to a hot start. They are already aware the money doesn't actually exist until April after Patreon fees fire, but they're eager to get going. 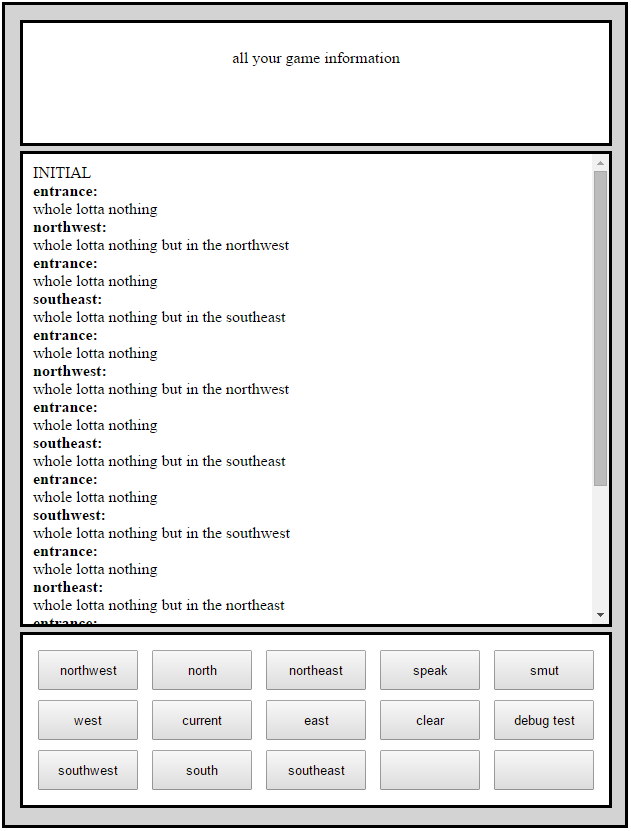 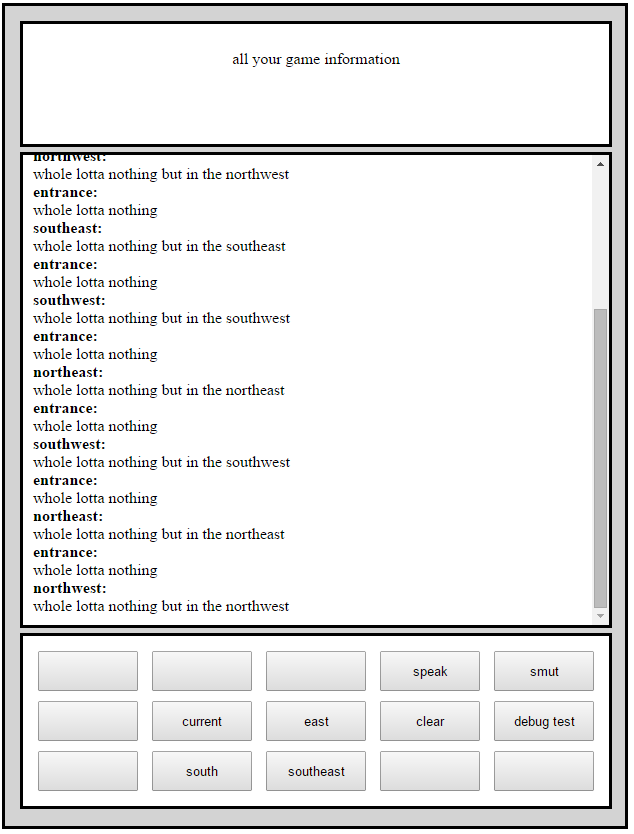 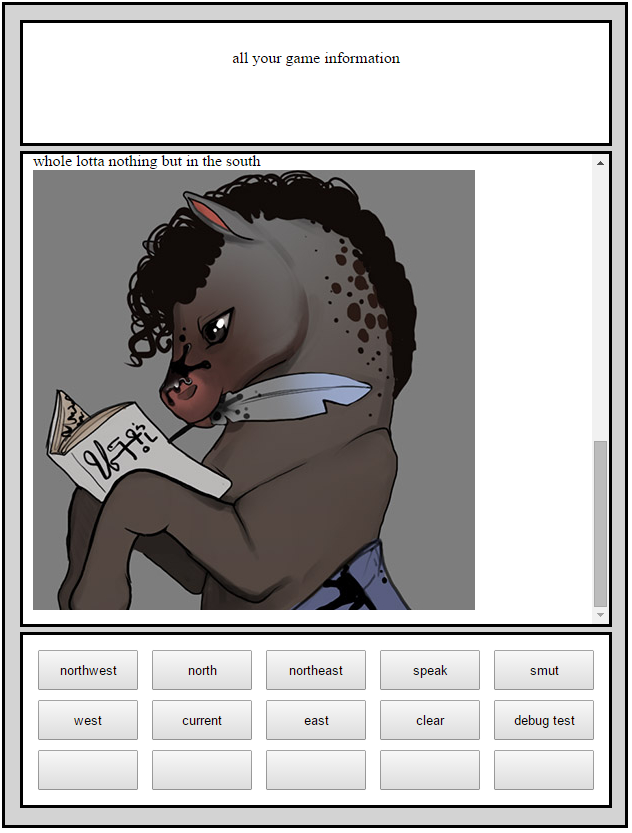 Posted by David Silver at 11:15 AM
Email ThisBlogThis!Share to TwitterShare to FacebookShare to Pinterest

Behold: https://www.freelancer.com/jobs/Website-Design/Flexible-Survival-Conversion/ We are officially on the lookout for a programmer to make our next-gen engine, that should be entirely web compatible and without the limitations of Inform. Do you want to get in on this? Click above, put in a bid! We'd love to have a community member doing the programming.
Posted by David Silver at 9:57 AM
Email ThisBlogThis!Share to TwitterShare to FacebookShare to Pinterest

Your support was immediate and encouraging. As promised, since we hit $50, Flexible is back to being tierless, with every player getting access to all the content immediately. If you haven't already, consider dropping by https://www.patreon.com/FS and joining the Patreon, even for a little as a dollar/month, to help support the game, its authors, and continued development. Thanks, Nuku
Posted by David Silver at 1:18 PM
Email ThisBlogThis!Share to TwitterShare to FacebookShare to Pinterest

Do Away with the Sub System?

Are you tired of the tiered system? Do you want everyone to have access to the same game at the same time? Do you want to have more say in the development of the game, get your own scenes and/or art, and get listed in the credits of the game?

All of this is possible!

Head on over to our Patreon at https://www.patreon.com/FS and show your support. If we can hit and cruise at $50/month, I will do away with the tier system entirely. If we can go higher, well, we got ideas(FS re-written with a modern engine? It could happen)!

Have an idea for a tier? Don't be shy. Let us know about it.

Thanks for riding with us,
Nuku
Posted by David Silver at 6:11 AM
Email ThisBlogThis!Share to TwitterShare to FacebookShare to Pinterest

In advance of Furnal Equinox next week, I finally got around to posting up the artwork I've collected over the past several months on FA.  Among them were four new pieces of Flexible Survival artwork.  I'm really happy with how all of them turned out and I hope you enjoy them as well.

As usual, I will be attending Furnal Equinox again this year.  If any of you are going and would like to chat, just message me in the forums and we'll see about arranging to meet up.  I'd enjoy the opportunity to get some direct feedback from the players.
Posted by Stripes at 8:19 AM
Email ThisBlogThis!Share to TwitterShare to FacebookShare to Pinterest

Long overdue is another update on the advancements and additions made to the game.  Due to Wahn's wrist injury, his material's been largely on hold.  He's coming up with ideas and getting stuff together, but has no new material released at this time.  On top of a bunch of typo corrections and minor tweaks/improvements, we've got the following material added:

Stripes:
Knight and Squire (Feb 21): The bold if sometimes arrogant knights are roaming the Urban Forest in search of glory.  Their squires are roaming around there as well, seeking to prove themselves to their knights and to further their training so they might best 'service' their well-hung masters.  Both of these react differently to the type of player they encounter - be they knight, squire, (passably) human or 'monster'.
Yolanda + Dom Icarus (Mar 1): A pair of threesome scenes involving these two are now available from Yolanda.
Skunkbeast Lord (Feb 2): There's a set of special scenes for visiting Zephyr when completely infected as the Skunkbeast Lord.
Ewe/Ram (Feb 2): New endings added to account for male members of the flock who've been sufficiently 'trained' by Leon.
Bunny Jock (Feb 8): New player loss oral scene.
Wolverine Guard (Feb 8): New player loss oral scene.
Peacock (Feb 21): New player loss oral scene (for males/neuter).
Ninja Cat (Feb 21): New player loss oral scene.
Heat (Jan 25): Status notifications are now included in the player's description.

Blue Bishop:
EDIT: Salamander (Mar 5): A new bound-state struggle against the Salamander and her elastic tongue, lest you end up in her belly.

Others:
Xinacs (Feb 12-20): Streamlining and clean-up to the inventory system as well as other functional improvements.  Thanks a bunch.