Hi everyone, this is Wahn again with the Flexible Survival News for January 2019.

Atticus: One of Lilith's demon offspring will now be hanging out in the Burned-Out Chapel. The cocky little bastard is quite eager to hang out with his mother's lovers too.
Broken Husky Bad-End: There now is an elaborate bad-end (more of an interactive short story really) that leads the player down a dark path of becoming the husky plaything of a dominant alpha. It can only be ecountered if you are a male that has chosen the feminine TFTG feat "Artemis's Disciple". To get the bad end to trigger, you must face the husky pack that has captured Sarah, beat the females, but lose to the alpha. So far, only week one is complete with 4 weeks planned. This will also introduce the husky deltas.
Carl: The soldier husky's content has gotten an update, including various talk options as well as endings for his two paths.
Copper Dragoness: You can now have some fun with the Copper Dragoness if you win the fight. You can either service her with your hands and tongue, or you can literally dive right inside of her.
Eric: After getting Eric an orc cock, you can now have an 'interesting' encounter with him if you use the bunker shower just after midnight...
Gabriel: Your angelic fucktoy has gotten several new scenes, including training him to be a cumslut.
Kobold: Added a new orgy victory scene for herm and male players along with an updated victory menu.  Both the new victory, and the old one can be accessed by beating the Kobold Gang in the Redlight District.
Kyrverth: Your favorite red dragon has gotten some updates and expansion to his content.
Latex Wolf: An old classic, the Latex wolf has gotten a updated victory menu and a redone, more in-depth victory scene that gives you a little bit more choice than you originally had.
Lux & Umbra: The player can now give birth to twins Lux & Umbra if they are impregnated by Fang. This is available to male, female, or herm characters.
Randall and Brad: The couple have been given a room along with a few dialogue options and a few sex options to boot. As a fair warning, two scenes are male only but one scene anyone can do.
Skarnoth: A Master/Slave event chain can be ecountered around the library. To do this you must have Nala (either as a friend or as a lover), and you must raise his loyalty by letting him have his way during sex and/or feeding him demon seed. Content for all genders and doms/subs.
Skarnoth: New sex option has been added for players that have taken the demon's Master/Slave event chain as far as it goes for now. Note this scene is exclusive to sub Skarnoth and also has a variation if you have been feeding him bliss during his events.
Sylvia: Bug fixes for gender preference and correcting event order.
TFTG feats: As you travel through the Museum, you might come across the event "Divine Twins." The choice that you make will decide whether you want to embrace everything masculine, feminine, or whether you just want to run away.
Wukong and Hanu: Hanu is given a place to live at the Zoo: the monkey house. After completing the quest "Monkey Duel" (available after completing Wukong's quests in the Museum), Wukong will move there as well. The interactions with him or Hanu will depend on how you resolved "Monkey Duel". 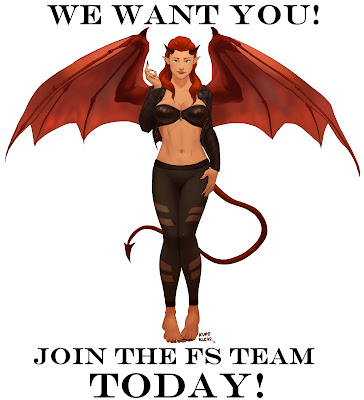 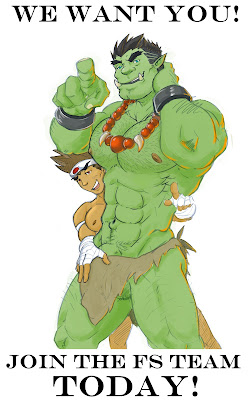 Thanks to our new and greatly increased number of writers, we are even more ready than before to fulfill any wishes for new content specific to your desires. If you are interested in commissioning us, please do contact me on the FS Discord - then we can find the right writer for your project. The going rate for hired writing is 15$/hour.
Posted by Wahn at 2:15 PM
Email ThisBlogThis!Share to TwitterShare to FacebookShare to Pinterest
Newer Posts Older Posts Home
Subscribe to: Posts (Atom)
Become a Patron!