Hi everyone, this is Wahn again with the Flexible Survival News for June 2019.

Alexandra Breeding: You can now take Alexandra to the farm so she can be taken by the twin Friesian horsemen, Karel and Isaac. And if you're a woman, you can take one of them yourself at the same time.
Atlantis: The city has a few events that you can run into to liven up the place, based on if you've met certain NPCs. On top of that, Astor, Azure Dragon Chef of the City, has been added. He has food that you can buy that boosts your stats for a limited time!
Black Wasp Parasite: Reduced libido numbers to make it easier to remove the parasite. Alternatively, players may ask Medea for help with their bug problem.
Fang: Alpha Fang can now be accessed without requiring Sandra or banning of females. No longer shall the dominance of a wolf be at the whims of a bunny.
Gabriel: After some cumslut-training, Gabriel will now try to suck off David in his sleep. There are various ways this might go, depending on your choices.
Gryphons: The guard gryphon who knows the way to Qytat will react much more favorably to other gyphons approaching her now and will actually talk with you.
Journal Notes: You can now write in your journal and look up the notes you took, allowing you to keep track of quests and whatnot.
Sonny: You can now make the subby sheep-boi a dommy sheep-boy if you've romanced him enough. Comes with a sex scene to turn him and a sex scene that you can repeat
Spike: Your dobie companion can now run into male Tehuantl, leading to training and possible bonding between them.

Here is an example of the new ingame artwork, showing a husky bitch: 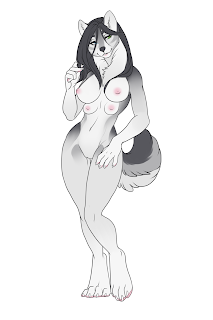 Posted by Wahn at 10:56 AM
Email ThisBlogThis!Share to TwitterShare to FacebookShare to Pinterest
Newer Posts Older Posts Home
Subscribe to: Posts (Atom)
Become a Patron!