Hi everyone, this is Wahn again with the Flexible Survival News for August 2018.


It took a little longer this time to finish everything up for the blog post, but you're getting something new and shiny for your patience: A new "Export Progress" / "Import Progress" system that completely replaces the old saveword. Now you won't have to worry about what may or may not be part of the saveword and can just export your current playthrough into some files which then can be imported again to restore things to what they were. This includes all details of the player (level, stats, infection, feats, vials, video tapes, inventory, stash, ...), npcs, rooms, quests, events, ...

Anthro Rabbit: The Rabbit Pack has been rewritten completely, no longer a split body personality rather, are just a group of kind rabbits happy to see the players! They have been written to include sex scenes for players who have the Anthro Rabbit (the new infection tied to them) or Bunny Jock infections. On top of that, certain players may find an item that will be very helpful and stays permanently in their inventory. More will come in a later update so look forward to it!
Aurora: Now has an unbirth scene for those with full unbirth on.
Bradford: The bounty hunter has gotten new bounties, reworked menus, and a few new story scenes
Centaurs: Both centaurs in the Dry Plains have new vore defeat scenes. The males have a cock vore scene while the females are able to unbirth the player.
Darius: The dalmatian dealer now is selling dalmatian infection items too and has gotten some new scenes.
Deer: The Deer enemy encounter now appears for those who have started in Forgotten Mode.
Diego: The sly coyote has a new quest for you, where he sends you to retrieve a special collar. (Important note: Delivering the collar to Diego after the first stage of the quest is still WIP)
Fur Brush Fix: The fur brush now can be found in the pet shop near the Grey Abbey Library, allowing access to fun brushing scenes with Ryousei.
General Fixes: Lots of typo fixes have been put in all over the game.
Horus: Have a run in with Amuran's deity and start a quest of great importance concerning a growing darkness in the city. There are no sex scenes yet but will come in a future update.
Hunting Code Fix: The hunting code has been rebuilt and should now work properly again.
Ice Cream Truck: There is a new bad end that you can run into if you can't stop your desire for ice cream.
Kangaroo: The kangaroo has gotten some new scenes.
New Artwork: Fang, Mike, Susan, Darius, Eric, Mul, Koghh, Yatur, and Rane have gotten all new artwork to their names.
Park Events: Various events in the park have been reworked.
Peacock: There is new content for the peacock enemies too.
Savina: The hypnotising snake now has a new variation for dealing with victims you bring her, three new sex scenes, and two vore endings.
Seraphis: First event 'Conflict Within the Plains' added to introduce the character with two adult scenes; one dominant, one submissive.
Smith Haven Mall: New Event added (Sailboat Painting Mallrat encounter).
Urban Forest Hunting: The Urban Forest has been fixed up for hunting.

Here an example of some new FS game art, a picture of Fang, drawn by the talented SineAlas. The new graphics windows allows us to show images like this with far higher resolution in the game. 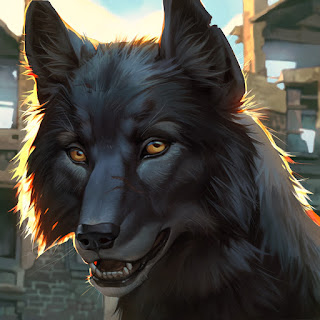