Hi everyone, this is Wahn again with the Flexible Survival News for April 2018.

Artwork Crashes: Seems like the Mammoth, Tigress Hooker, Frank and Sidney pictures had some sort of issue that caused some clients to crash and others to not display them. This should now have been resolved.
Blue Goo Collective: In the back room of the mall community center, a collective of goo people with a group mind is hanging out. You can go help them take care of their needs if you wish...
Bouncy Castle: Untethering the bouncy castle is now optional, and players can choose to return to it after Bubble has been saved or lost
Bovine: Cock vore scene now more accessible. Updated to be more in line with current FS feel. Groundwork laid for turning the tables on the bull.
Bugfixes: An error that prevented various events for Eric, David, Sarah, and Amy to come up has been resolved.
Body Shop: The permanence of bought body parts has been adjusted a bit, which should hopefully prevent any unfortunate interactions with the "Singular" feat from now on. You can also just sell your parts to get rid of the permanent infection.
Chase: New oral scenes added to both dom variations, as well as 2 new walk-in events if you have Chase's primal dom form.
Codebase Progress: Developments to integrate worn clothing of the player into scenes have begun, meaning that monsters (in a few scenes, so far) will actually pull off what you wear.
Coura: Nermine has plans for one of the mall rats - gender-switching him and having some fun. (This comes up if the player is the jackalman and the mall rats had made an offer to do a bukkake scene with Nermine)
Dire Wolf: This powerful feral beast can now be found stalking the Urban Forest. If you aren't careful, he'll show you why he's a force to be reckoned with.
Dominick: Forced Submission sex scenes completed. You can now be TF'd fully as a Beta or Omega with the fast or step-by-step options.
Feral Mutt Pack: The feral mutt is back, and he brought his friends! After losing or winning against the feral mutt three times, you can run into his pack. Encounter differs if you lost or won three encounters with the mutt.
Frank: An error in the picture for Frank has been resolved, which should allow the pic to come up without bugs or crashes now.
Hyena Matriarch: Having 'Full Vore' on after losing to the gang leader twice will open up new vore scenes, which include a bound state and with Gina joining in on the fun.
Impregnation Fixes: Various missing impregnation calls for a number of npcs have been added in. Be prepared for more babies :) (Thanks to throwaway1003)
Koballoons: The Koballoons have received a significant expansion. They now have several options for scenes when the player defeats them, an additional scene when the player loses, as well as new bad ends
Male Dorm Events: There are now a fair set of events in the Tenvale Male Dorms that can be triggered by just going to the lower level of it. Hopefully this adds a bit of life to the dorms there!
Mall Community Center: Three antelope sisters have opened a community center in the mall, to help the masses of refugees.
Missing Artwork: A little coding error caused the Queen Bee picture not to appear. This should be resolved now. Please do report if any other art pieces you remember are not showing up.
Moreau: The proprietor of the body shop has gotten a half a dozen all new events in his store. Be sure to check in with him from time to time after you've talked to him.
NPC Creation: Klauz- the felinoid companion, Dash- the fox kit, and Peppy- the skunk kit.
Pericles: The buff leader of the Spartans and Helots now has a room where a male player can have some fun with him! It's on the second floor of the Male Dorms, and he's available all day
Philip: The pig-man has been moved to a shed behind the library, instead of the bunker.
Sewer Gator: Subsequent victories against the gator will give you a chance to get your face into her scaly booty. Having 'Full Vore' on will open up a new vore scene, which includes a bound state.
Shaft Beasts: Both the Anthro Shaft Beast and the Feral Shaft Beast have been edited to meet quality standards
Shag Shack - Gus the Stork: A new resident whore has moved into the Shag Shack, this one a male stork with a number of sex scenes and even some background story.
Toy Store: The Toy Store event in Outside Exploration has been completely rewritten, offering a new, unique orgy scene on loss or submission
Typo Fixes: Various typos in Bjorn and Sonny have been resolved. My thanks to Genesis106097 for detailed typo reporting.
Video Tapes: Two new video tapes can now be found in the High Rise District, showing you scenes from the start of the outbreak.
Zeke: When playing for dominance against Zeke, you can now choose to throw the match.

Here an example of some new FS game art, a picture of Chase, drawn by the talented Sinealas. The new graphics windows allows us to show images like this with far higher resolution in the game. 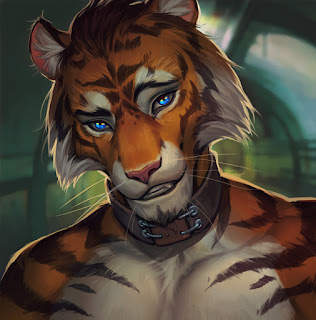