Hi everyone, this is Wahn again with the Flexible Survival News for July 2019.

Carl & Korvin: The two dogs now have a number of events where they interact and possibly hang out (depending on which state each is in).
Dwarves: A horny dwarf has been sighted in the urban forest. Watch out for him!
Export/Import System: You might notice some additional files being created as you export. This is to save a number of new variables created in the last few months.
German Shepherd: The randy dogs have gotten some all new artwork, appearing as dashing rogues.
J'Reth: The Draco-Mantis awaits your return so that he can repay you for your kindness. Those who are kinky may find him a little more adventurous...
Kai: A new surfer has been spotted on the beach, as long as you don't mind a few gills and stripes, then this aussie could prove to be a great catch!
Monster Encounters: We're changing the way you encounter random monsters when exploring. There's now a flat 20% chance for an encounter when just wandering around, which can be decreased (-10%) by getting the Stealthy feat or increased (+10%) by getting the Bad Luck feat.
Pet Mutt: If you prove to the feral mutts who's the top dog often enough, one of them might just follow you home. Accept him and you'll have a happy canine that you can give a name and have lots of fun with.
Sam: The sciency taur now has more Shrinking Shroom scenes in the form of unbirth and cock vore, both of which have bound states after doing the respective scenes a few times

Astor: A typo in his meeting event has been fixed.
Beach Restaurant: You won't be missing the door to enter the restaurant anymore now.
Blue: Blue now gives female players some proper oral attention before fucking them.
Bouncy Castle: A missing word in the escape scene has been patched in.
Chris: A small typo in his scene with Kai has been fixed.
Dash: The first meeting of Fang and Dash will now only happen once.
Dragontaur: The various forms of Sam are now flagged to have wings, allowing the player to fly up from the belltower on campus.
Gabriel: A small typo in his recruitment has been fixed.
Gloryhole: Being knotted in the gloryhole is now more enjoyable and minus some typos. Same thing for tail pegging.
Infected Fountain: The player character will now keep chugging water from it until all thirst is gone.
Janice: She will now properly identify and train players with the Arctic Fox infection.
Kara: The submissive hyena piercing will no longer make you permanently pregnant.
Kitsune: The last paragraph of kitsune scenes should now appear properly.
Kitsune: The stage of your progress within the Strange Fox Event is now saved properly.
Korvin: Some words that got out of order in his recruitment have been straightened out.
Lucifer: Lee doesn't accept air as a trade for using the harness anymore. You'll now have to give him centaur hair.
Medea: The status of her truck quest should now be properly restored after an import.
Milking Facility: You now actually need the keycard to get into the facility.
Miyuki: A typo in her sex scenes has been fixed.
Nanite Vials: Since excessive hoarding caused some localized holes in reality, the maximum number of vials of each type you can carry has been reduced to 15.
Panther Taur: Some small typos were fixed in the kitties.
Park: Exploring from the "Park Entrance" room will take you back out into the city now, as intended. You have to go into the park to hunt there.
Percy: He won't be handing out fruit to people anymore.
Phantom Balls: Invisible balls attached to some players are no longer a thing.
Ranae Ending: A small bug in her endings that was creating problems has been removed.
Rex: When fighting, the retriever will now be announced by his name instead of a female retriever.
Sailor Outfit: Wearing the Sailor Outfit should now be properly reflected in your character's looks.
Sam: Sam's character image will now be properly restored after an import.
Shag Shack: Whoring yourself out will now actually take some time.
Undie Race: A small error in this college campus event has been resolved. You should be able to encounter it normally now.
Wyvern Female: The sentence structure when watching a wyvern encase someone should be easier to understand now.
Wyvern Male: There's now a check for the player's size so they actually fit onto the wyvern's cock for anal.
Xeno Nest: You now get the proper loot from the event.

Here is an example of the new ingame artwork, showing a german shepherd: 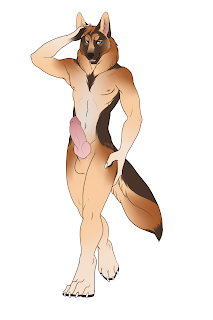