Hi everyone, this is Wahn again with the Flexible Survival News for July 2018.

Alexandra: The bad bitch version of Alexandra has gotten an update, including a talk menu with options of talking about her background, other people in the library, putting her on contraception, or getting her fertility treatments (once she's been pregnant 3 times). She will also physically react to things the player does, changing her appearance if the right conditions are met.
Amazonian: We got some new artwork for the lovely ladies.
Astroslide Football Field: Added a shower area in the locker-room for fun times with the apes
Black Market: Bare basics of the black market have been added to the west of Zephyr inc. The medicine case will have new items for perusal, and for the first month, the brand new items will be at a serious discount while people try them out. The story aspect for the black market and the store owner Barret have not been added as of yet.
Bouncy Castle: Added an inflatable otter suit to the bouncy castle. The suit will try to ensnare male/herm players as a source of power (erotic bound state), although female/neuter players can have fun with it as well (sex scenes)
Branson & Partner: The first office girl has been added to the B&P Offices. Chat with Lola to get her view of things (sex scenes to come in the future).
Capitol Event: A new one-time scene in the Capitol area features a frisky otter and a Pewter Consort
Darius: A muscular dalmatian is now living in the red light district, selling some definitively nonstandard tablets and other items.
Eric I: Part of Eric's new loyalty variable will be the option to feed any dicked Eric an orc pill that will give him the mpreg feat. This will eventually lead to unique offspring and heat sex, as well as a way to drug him with the orc pill and reduce him to a male breeding sex slave. To get the convo to succeed, you need his loyalty to be at rank 10.
Eric II: You can now offer orc brew to the young man to restore his masculinity. It'll still be green though.
Hyper Fang: You can now find a briefcase full of hyper serum vials, which might just lead to Alpha Fang lapping some of the stuff up and dominating you in a new hyper form (until the serum wears off)
Loyalty: A new variable has been added to a few of our NPCs. This can be increased by having specific sex with them or by giving them items that they may enjoy. Eventually this will also be a way to make certain NPCs available to join you on your journey through the city.
Mareslut: These horny horsies have gotten new artwork too.
Pet Shop: The Pet Shop is now a real location, just down the street from the library. In it, you can dig your way through the chaos of its inventory, finding collars for Sarah, Sven, and Korvin (once you've reached the right spot in their content).
Porn Store: You can now just walk up to the porn store as you explore the Red Light Distict, no longer having to search for an event.
Quest Logs: Preparation for implementation of the quest log has been done for Sylvia, Julian, Otto Fuchs, Twelve Labours and the Farm Quests with Anthony.
Red Light District: This area was reordered a little, connecting the existing rooms of the Porn Store and Chapel to a central road.
Rubber sneakers: Various fixes
Ryousei: If you grab a brush from the Pet Shop, there'll be an interesting new scene in Ryousei's talk menu. Things can go two ways once you start brushing his fur.
Savina: A hungry, seductive snake of enormous proportions has taken residence deep inside of the Urban Forest, and she's looking for someone to do her bidding. More scenes to come in the near future.
Sgt. Marks: After fighting the tiger cop several times, you will be offered the chance to help him catch a new gang by posing as a prostitute.
Skarnoth: Part of Skarnoth's new loyalty variable will be the ability to leave his chair and roam around the library. Note that while you need Skarnoth at a certain loyalty, you must also recruit Nala. This route will also eventually lead down a path to make him your master rather than slave, or you could also get him addicted to libido pills and turn him into a mindless slut. To get the event to pop, you need to get his loyalty to rank 5, for his second event he will need to be rank 10 and you must have more than 5 residents in the library.
Snow: The herm engineer has gotten some new artwork to her name.
Sylvia: Two events covering punishment of an unfaithful boyfriend.
Tenvale Gorillas: Roman needs you to find more players for the team. Short sidequest adding new scenes. You need to talk to Roman after joining the team and getting his first quest's good ending in order to trigger this one
Timothy: The broody gryphon has gotten some artwork.
Various Small Fixes: As usual, work on the bug reports that came in has resulted in a number of fixes and improvements in the game overall. Thanks everyone for reporting any weird stuff you might find - we rely on you to point it out so we can fix things.
Viking-Spartan War: After having dominated Bjorn in a spar and befriended Pericles, the player can convince the Viking male to apologize to the other. This leads to a series of events that starts a war between the two factions. Can you, the player, successfully avert disaster?
Vohr Island: The Rat Twins want to share rumors with you about a strange, isolated island. New area and vore-themed enemies
Zoo Events: Two more zoo events added for the player to witness.

Here an example of some new FS game art, a picture of Sven, drawn by the talented Brun69. The new graphics windows allows us to show images like this with far higher resolution in the game. 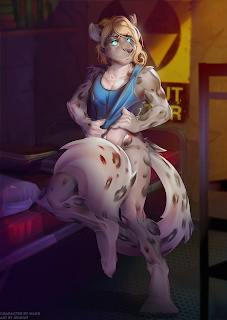 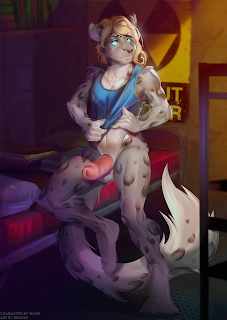