Hi everyone, this is Wahn again with the Flexible Survival News for December 2017.

In regards to the FS Patreon, I do want to thank everyone who contributes. Provided that the current contributions are kept up, we will now have five patreon polls for new content each month, with a sixth poll being a definite possiblity if a few more people join up.

Brennan: The human survivor now wants to investigate Camp Bravo, which leads to a trip to the hospital in the aftermath.
Candy: Candy the candy striper raccoon has gotten a well-deserved expansion, improving his sex scenes and opening up a storyline about his past.
Content Flags: Ban and Ward Flags have been updated to run in a new menu, with additional flags being added. (It'll take a while till all our content makes use of these, so be patient about those)
Danny: The foto safari of the naughty mall rat now has another chapter, leading you and him to the zoo, to encounter the zebra stallion.
Editing and Improvements: The Naga, Alpha Husky, Arctic Fox, Greek Nymph, parts of the Shag Shack, and the Shrinking Shrooms scenes have been thoroughly edited, improving their quality for your enjoyment.
Family Fun: You can now pick up the trace of a young man called Wayne, his best friend Luther as well as Wayne's father and their relationships with one another in a new outside event. This includes to naughty videotapes, so be sure to grab the camera to watch them.
Feral Mutt: A new feral dog enemy has been added to the game. Fight, dominate or submit to these wild beasts inhabiting the junkyard.
Hanu: The zoo of the monkey has his content expanded, and tied in with Wukong of the Museum. If the two simians clash, a new creature will start to stroll the alleys of the zoo
Hospital Quest: Fixed a bug preventing progress in this quest line. It was caused by some background changes on how combat was handled.
Hunting: Some underlying errors in the code for hunting have been resolved, hopefully fixing any trouble people may have had with it.
Krampus: The goat-demon Krampus has moved into a cave adjoining the Christmas Village. Those who deserve some punishment by the dominant anthro can go seek him out.
Malakhi: A young male zookeeper intern turned human-panther hybrid is now roaming the zoo, playing pranks, feeding the animals and hanging out with his anthro panther trainer. Happy hunting for the 5 events in series for him.
Nermine: The sexy times that you can have with Nermine as a jackalman have been polished up and put into an all new sex menu, to be expanded with more scenes in the coming weeks.
New Artwork: Brennan now has full body art, and Malakhi comes with two pictures right from the get-go. The Ebonflame Draken also got some new artwork.
New Artwork: The Tiger Shark Warrior and the Pirate Shark also have gotten full body art, drawn by Zealot.
Ogres: Three ogres now roam the junkyard, to be encountered by the player.
Player Name: You can now give your character a name. Either do this in the game start menu or use the command "rename <name>" to change it from the default unnamed player to whatever you may desire. Bit by bit, we will update existing npcs in the coming weeks and months to make use of this for introductions and so on.
Pregnancy Blessing: Miyuki the ice fox (found in the forest) will now offer a quest to help her prepare blessings for expectant parents. These will greatly decrease the strain of birth, and give a little stamina boost on top of that.
Roman, Twin Rats: Typos fix. Bad ending for Roman's quest fixed
Shadow Beast: Player victory scenes have been added to the tentacled cats in the underground of the Trevor Labs.
Video Camera & Tapes: There is now a functional video camera to be found in the city, and also a number of video tapes. These will allow the interesting scenes recorded on them to be re-played whenever you want.
Zebra: The Zebra now has an interest in submissive male players. He is now able to be dominated by players of any persuasion who best him in battle. New endings have been added for Zebra form players, also tied to the dominant/submissive traits.

Besides various ongoing projects, small and large expansions of FS are being directed to one 'focus area' each month. This was the Smith Haven Mall for September, College Campus in October, Beach in November, Zoo in December and January will be the Dry Plains Month. Expect more updates for that area as the month progresses. 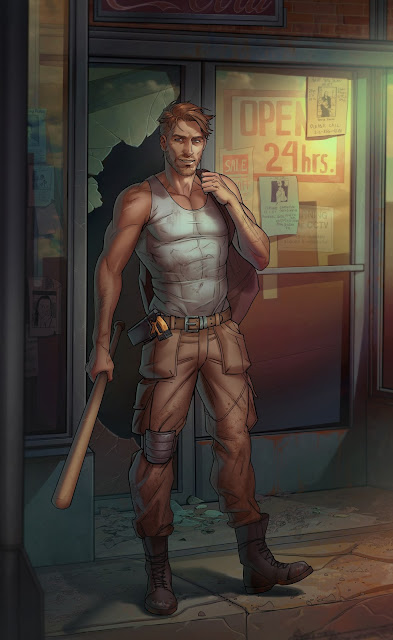